What is the total supply of VXV?¶

What is the current circulating supply of VXV?¶

When will the correct circulating supply be reflected on Coinmarketcap, Coingecko etc.?¶

We are aware of it, and we are working to get this updated in compliance with these pages’s criteria for listing the circulating supply.

What is the current market cap of VXV?¶

No, there was no ICO. Around $700k was raised by angel investors, family and friends.

How can the company run for over 3 years with limited raised capital?¶

We have run startups before and with a burn of $650k per month. We also know how to run very lean and scrappy. In part, we can do this because we are working on tip of the spear science and technology which attracts talent for reasons beyond the cash.

All of the heavy work is already done. As a team we like doing the hard parts first. This is the reason we have multiple products releases now and in the past. A to Z execution, that is what our track record shows.

We adapt to cheap, low maintenance and smart money along with the market and our customers. This means we operate on their schedules not our own.

What is the token distribution?¶ 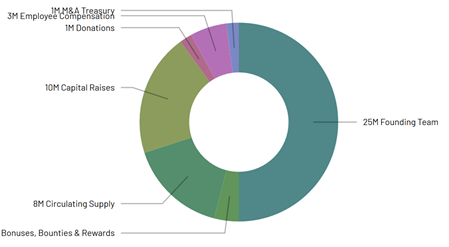 The team`s founding tokens have a 4 years lockup period. Only team members and certain partners are locked or vested. We will have more updates on the number of locked/vested tokens in the future.

How often does the circulating supply increase?¶

The supply is only to increase when absolutely necessary. We know a healthy amount about the dynamics of circulating supplies and its effects on price movements – this is called the ‘float’ in the traditional markets and you want your float as low as possible and not bloated. The majority of cryptos out there have far too many of their tokens in their circulating supply and that prevents them from running. This also connects to how your overall capitalization table is structured.

We are not a typical crypto “team”. We function as a startup similar to the ones you find in Silicon Valley. We plan to use the founding team’s tokens to move the company forward in any way necessary, including engineering, strategic IR/PR, customer support and whatever it takes to get to revenue and then profitability.

What is the purpose of the VXV token?¶

The token can be used to pay for a subscription to access Vectorspace AI’s services, although customers can also pay for these subscriptions with USD, ETH, or BTC. Beyond payments, the tokens wallet address serves as an API key for the distribution of datasets. From a software engineering standpoint wallet addresses function exactly the same way API keys do. This allows the distribution of datasets to be seamless and allows our customers to utilize the highest level of data integrity. Finally, and arguably most importantly, the token is utilized in our Data Provenance Pipeline.

Data Provenance is essentially the life cycle of data. It is used to track the origin of data, the source of data, what computations were conducted on that data, and provides the framework for troubleshooting issues amongst datasets. On a blockchain, all transactions are natively hashed. This means that our data provenance pipeline has the highest level of data integrity and transparency. As an added bonus, the native hashing on blockchains makes the troubleshooting cycle much easier by allowing developers to easily identify duplicate data sources or discover issues in the calculation of their datasets. We understand that crypto currencies are difficult to utilize and we have made it easy for our customers to utilize the benefits without having to deal with their own custody via our partnership with Trustology.

Is it possible to obtain interests on holding or staking VXV?¶

No, it is not possible at the moment. There are talks about developing a feature to “lease” your VXV (leasing the access to datasets), potentially resulting in some kind of income, but this is a long-term goal.

Yes, we want to accumulate as much VXV as possible, that’s our main purpose with buybacks. We value VXV. 50% of the revenue will go to buybacks, please refer to question 36 under the financials sections.

Buybacks help to control float, which grants control over the uncertainty of the market. Controlling float is important so that a company can’t be pushed around by anyone who doesn’t have the company’s best interests at heart. Defense against market manipulation.

It should be understood that though some coins have altruistic purposes founded in decentralization, VXV is not one of those coins. VXV is a utility token that is central to the business plan of a for-profit company. So long as the company performs well, both equity and token should increase in value.

Why do the team’s tokens move to a new wallet from time to time?¶

We follow proper security protocol and industry standards. Everyone should also be changing their passwords from time to time in addition to using a password manager if necessary. We started enforcing proper security protocol and information security back in the early days because we know that the greatest attack vector relates to social engineering. The objective is to eliminate as many attack vectors as you possibly can.

Can the team provide clarification on the strategic selling by the team from the main wallet?¶

There is no strategic selling by the main wallet. What is occurring is called capital raising. In fact, the entire financial market around the world is based around capital raising (hence why they are called capital markets). One of the reasons why public companies exist is by raising capital through the public. Questions around movement of funds from the wallet are at the discretion of the team in relation to capital, deals, etc. This is a complex process, and it is recommended to look up Paul Graham for a background as to why companies raise capital.

Why did Vectorspace AI go the crypto route as opposed to traditional business routes?¶

“How Apple Influenced The Labels To Shut Down My Music Streaming Startup” https://medium.com/startup-frontier/steve-jobs-made-warner-music-sue-my-startup-9a81c5a21d68 We had an offer for $120M for the company, then the economy crashed and while we were being litigated for $40 BILLION dollars brought on by Apple, Warner and EMI. So, we wound it down. Another thing happened when we had that offer, my investors started to try to push the negotiations higher and the other group started arguing with my investor about valuation while I was sitting right there. After that I decided that I would not let the valuation of my company be haggled over by three or four guys, I want the public to set the valuation of my next company. So, I got a public company listed and it was called Mimvi. This time I was going to have public market exposure and the ability to raise capital from the capital markets. It was hard to do but we got It done and eventually got it fully liquid by doing an investment deal with MSFT. However, we were restricted from doing many more things that we thought we could do based on over regulation of smaller companies vs the larger ones. We also ran into a few crooks. This is the other path we have taken.

We gave it more thought and made a move into crypto in 2014 with something we called SongCoin, we were all over the media based on what we announced we were going to do for the music industry, you can read about it if you do a search for “songcoin pimovi”. Long story short our investor got panicked by what was happening in crypto with Mt. Gox and all. He was a 74-year-old Aussie named Max Grant. He ran a small traditional OTC company where its only assets were 4 or 5 oil wells down under and in Texas. He wanted me to start Pimovi and we would work together on SongCoin. He completed the financing but got spooked. So, we waited while one of the founding soft devs on the Namecoin team, Dylan Durst and myself spent a week at my house properly forking Bitcoin to SongCoin, full compiles. We needed funding to build wallets because back then, you had to build many things from scratch because nobody had any stable code worth using. We stopped work to try to figure out what we were going to do to protect this project. Meanwhile a guy named Michael Prince forked bitcoin and labeled it SongCoin – he basically ripped us off and he listed on Cryptopia and got CMC to start quoting him. I approached him in email and have the thread if anyone would like to see. At any rate, we hunkered down while BTC was crashing and then I was approached by my original SeeqPod investor. He asked what I was up to and I mentioned NLP and bots, maybe bots that teach people how to buy crypto. He then said “what is crypto” so I told him to go to coinmarketcap.com and call, then we can talk about what I am doing. So, I get a call from him at 5:30am the next morning and his excitement level is off the charts. He then asked if I could start a crypto company.

We started a company called Starmine.ai – it was designed to be a dataset company pure and simple. Long story short on this one, our investor got spooked by how traceable everything is on the blockchain and never came through with the funding so I took the team and the company and said, we are going to start vectorspace.ai and rely on smarter investors while we beef up the dataset side and add more feature vector options with real-time data, and here we are, sitting here with all you fine folks. While we were doing all of the above in 2014-2017, we were also consulting for a hedge fund, Artiman Capital in Palo Alto CA.

We also have a background in the financial markets based on the traditionals going back since 1997 when I made my first trade which was 2000 shares of SCOC, (Santa Cruz Operations) they were trying to make money on licensing their version of Unix called Xenix, which I was learning at the time as well. We ran it in a small real estate management firm called K&S in Albany which is next door to Berkeley where I grew up born and raised, several generations back. My uncle was a mechanical engineer in Idaho and my dad was a tinkerer. They got together one time and though it would be a good idea if they bought us a clone computer that we would put together ourselves. I got 4 of them and only got 1 working. Long story short, we have a deep history in software engineering and data engineering. Specialties in machine learning and data engineering combined with a deep knowledge of the financial markets, we think crypto is the perfect vehicle for exposing a trading vehicle to a truly global marketplace. We want to combine AI with crypto in a smart way and we think we have done so.

We have also moved a lot of money around in the traditional markets and we have helped people including hedge funds and family offices to move money in smart ways. It boosts our reputation which is good because they are back when we need them.

We are here because we want to see trading vehicles attached to valuable innovations.

We want to see valuable innovations have access or be able to raise capital from the new crypto capital markets because the traditional capital markets can be too exclusive while also the small caps take the brunt of regulation while the large caps get slaps on the wrist. We also saw a ton of manipulation in ways you could not believe as I have described in detail here: https://news.ycombinator.com/item?id=13844765

That is another reason, we are in crypto because we like transparency.